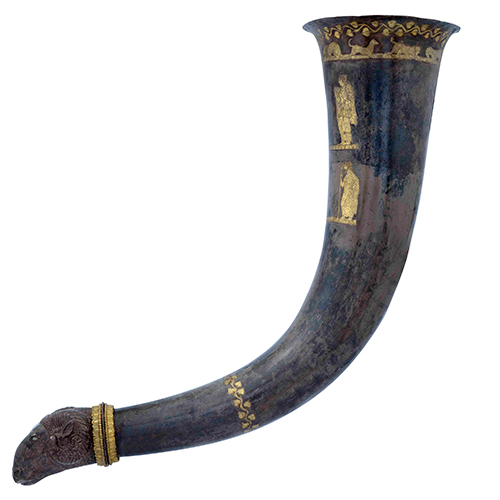 What we know about Thracians is that they haven’t created their own script, but in the toreutics they have mastered „the language“ of the plastics and symbols. This way we learn about their culture, beliefs, religion, skills, and even more. There are plenty of artefacts from the Vasil Bojkov Collection that tell us about the artistry of Thracian people. We see how well they have understood and implemented the art of creating something that leaves traces behind them so that the modern world can travel to ancient times. We transform into an audience that absorbs culture and observes mythological scenes that quite easily come to life in front of the eyes. All of them are inscribed on different vessels and antique items that manage to captivate us and make us wonder how a nation existing so long ago was actually able to ‘tame’ this type of craftsmanship.

One of the most impressive pieces from Bojkov’s Thracian treasures is the silver horn rhyton with ram head finial and figural representations engraved on it. This is the largest item discovered in Thracian lands so far and is dated at 410-400 B.C. Once again, Thracian people prove to us they have developed their own artistic language in which they present to us bits and pieces from their own world.

On the top end of the horn-rhyton, there is a detailed ivy wreath. This is a symbol that quite often can be seen on a great number of artefacts from the past. There is an interesting story that accompanies the ivy wreath and it goes back centuries ago. Much of the symbolism is explained through Greek mythology and is closely linked to Apollo – Zeus’s son and the god of life and light who fell in love with the nymph Daphne. Apollo pursued her but she managed to escape, asking Peneus – the river god – to help her. He, then, transformed her into a laurel tree. Finding this out, the god of life and light wore a wreath of laurel on his head from that time on.  So the meaning of the ivy wreath really became associated with Apollo’s attributes of victory and high status, and therefore it became one of the most commonly used symbols that stands for achievement.

Moving on, right under the smoothly carved ivy wrath on the curving horn, there is an animal-combat scene. If we look further below, once again, we come across the excellent workmanship and eye for detail of Thracian people. Strictly and very specifically outlined, there are the expressive figures of four men arranged in two fields. It is perceived that they represent the obscure story (which is rarely decorated) about Poseidon and Melanippe, and their two sons-twins Aeolus and Boeotus. Minute details and tiny ornaments highlight the vessel and its unique nature. Particularly interesting, this silver rhyton has a ram’s head attached to the body of the artefact. This type of items had a practical use and were usually used as drinking vessels, with the drinking opening of this silver rhyton is placed in the animal’s mouth. But this is not the only rhyton present in Vasil Bojkov’s private collection. There are also other pieces decorated with the fore-parts of a deer, a horse, a bully-goat, an ox, and others.

The antique works reveal new sides and problems of the Thracian antiquity, the ancient art, and their lives as a whole. There are vessels from the king’s tables. There are pieces from ordinary people’s homes. There are ancient jewelry specimens. There is a whole new history to be explored. The many findings in Thracian burials and tombs unveil the world of different archaic artists. These producers of culture and history retell tales and old songs through archaic images and elements inscribed to the character of different artefacts. The barbarian artist was seen (and is seen even nowadays) as a protector of sacred traditions.  Similarly to the ‘aedes’ who sang epic poems during royal feasts, the artists came to preserve and transcend those poems in gold and silver in the most mesmerizing and detailed kind of way. That’s why pictorial texts can be explained and interpreted as a self-directed language that is just as vital as any other verbal or action-based language back at that time.