Where Does The Richest Bulgarian Like To Travel?Iliyana IvanovaAugust 17, 2018August 2, 2018 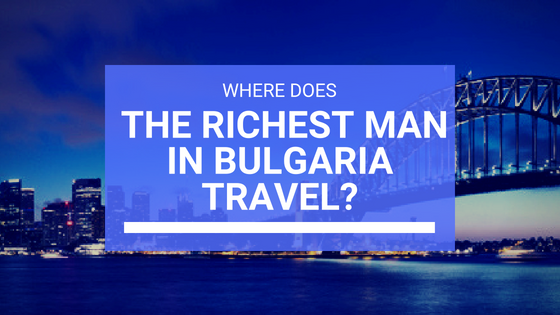 Who is the richest person in Bulgaria?

If you have ever visited Bulgaria you will know it is a beautiful country, with majestic mountains, sandy beaches, picturesque villages, delicious food and wonderfully hospitable people. The beauty of the country itself makes it a wonderful place to explore and of the people that live there, some never venture very far to travel, perhaps only as far as neighbouring countries. However, if you’re the richest person in the country, with no restrictions on your budget then the potential to travel has suddenly got much more scope. So who is the richest person in Bulgaria? Vasil Bojkov, a 61-year-old entrepreneur with an estimated net worth of USD 1.5 Billion, is not only the wealthiest person in Bulgaria, but he is also one of the richest people in Eastern Europe and travel is one of his favourite things to do.

Where does the richest man in Bulgaria travel?

If you had a billion dollars in your account, wouldn’t you travel? Obviously, the answer is a big yes, who wouldn’t like to travel around the world. Let’s have a look at where the richest man in Bulgaria travels throughout the year.

Chartering a yacht to far-flung and exciting places is an essential part of his luxurious lifestyle. Every summer he boards a luxury yacht to travel around the world and he especially loves going to Mykonos for his birthday. Mykonos is an Island in Greece which is well known for its summer party atmosphere.

The island has beaches like Paradise which plays thumping music in the bars and most world-renowned DJs visits the massive dance clubs. He celebrates his birthday at this island by throwing lavish and extravagant parties with his friends and family that is noticeable from almost everyone on the island.

He often loves to travel to Courchevel in France, a part of Les Trois Vallees, one of the largest linked ski areas in the world, where he spends time enjoying skiing, ice skating, ice shows and watching ice hockey competitions and variety of other shows.

He also spends his time relaxing at the pools in Aquamotion, the largest European mountain water park set in pristine surroundings. He is often spotted staying at the same villa there so the chances are he has most likely bought it for his winter vacations.

Another of his favourite places to travel to is Asia. He sails his yacht to the balmy Indian Ocean where he sits back and relaxes watching the sunset and enjoying the ocean breezes. You will also often find him yachting around the Philippines where he spends time enjoying the water promenade and centuries of old Chinatown.

He also often enjoys spending a few days in Boracay, an island in the Philippines that is famous around the world for its beautiful white beaches and the big parties happening on the island with fire shows and live music performances giving travellers nonstop entertainment. He has been spotted several times on the same yacht so people speculate that he owns it. After all, with a billion dollars comes the luxury to buy a private yacht.

South of France at Monaco, Saint Tropez is also one of his favorite spots to travel to in summer. He loves to stroll through the Old town at Port of Antibes and to visit the Villa Ephrussi de Rothschild in St Jean Cap Ferrat. He is also spotted visiting other places at Monaco such as the Palais du Prince where he takes a tour of the palace, Musée Oceanographique where he enjoys a dedicated touch tank, Larvotto Beach where he enjoys sunbathing.