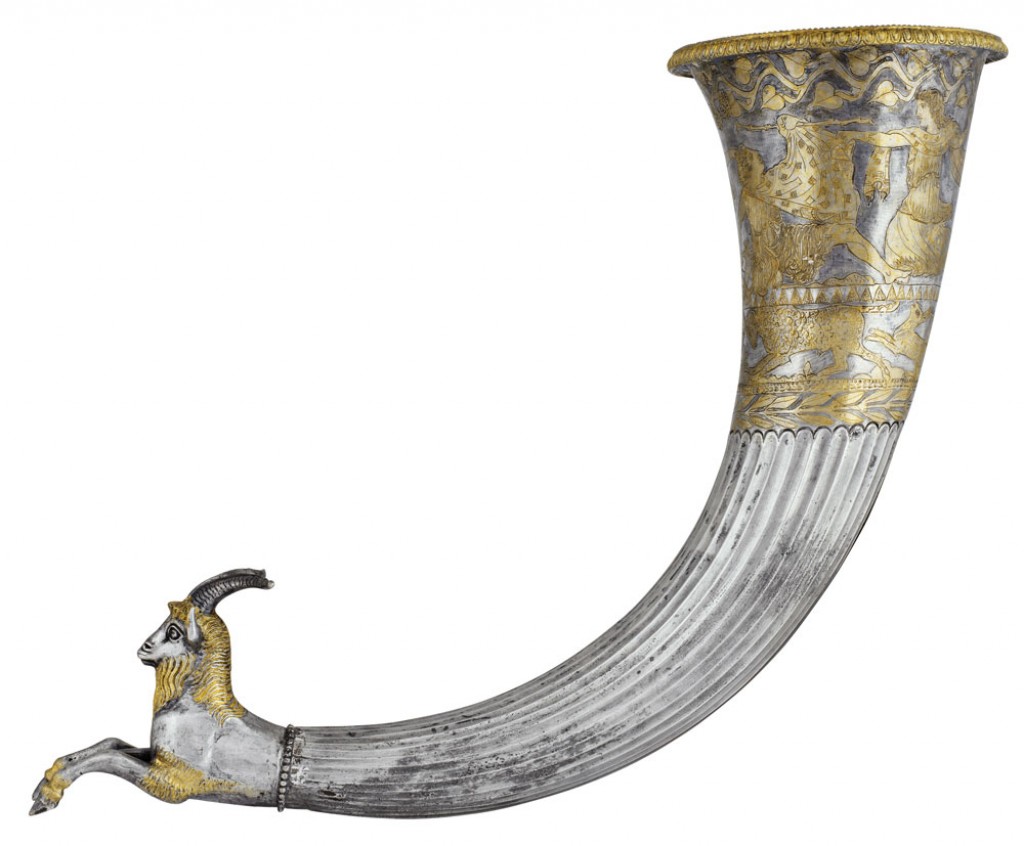 Every individual artefact in the Vassil Bojkov Collection has a unique story to tell. One particularly intriguing piece, and the feature of this article, is a silver rhyton, with a goat protome and a scene depicted on it recreating the death of Orpheus. The item dates back to 420-410 B.C. Traditionally, rhyta have been used for a very specific purpose, notorious in the lifestyle of the elite. Their unusual shape allowed for a person to drink wine from the front opening of the rhyton over a phiale (a wide, shallow bowl) during a feast. Rhyta were also present in initiations and rituals that involved the sacrificing of animals. This particular piece, though, isn’t only impressive for its decorative design, but for its symbolic representations which are deeply rooted within Ancient Greek mythology.

So let’s take a closer look at what this extraordinary rhyton from Bojkov’s collection reveals. Nothing about the design of the goat protome at the bottom of the piece is accidental. There is an ancient mythological tale about Dionysos’ childhood that involves his father, Zeus. In attempt to hide his child from his jealous and angry wife Hera, legend has it that Zeus transformed Dionysos into a baby goat and gave him to Hermes. Hermes supposedly then carried Dionysos to the nymphs of the mountainous district of Nysa, whom Zeus placed among the stars and names the Hyades later on. This story reveals the meaning behind the ritual importance of the goat in regards to the worship of Dionysos.

Yet this is not the only impressive feature of the silver rhyton. At the opposite end of the drinking vessel, a scene is crafted in gold onto the piece, which recreates the events of the death of Orpheus. The legendary musician and poet is surrounded by a group of Maenads who want to kill him. Konon, an ancient Greek writer who lived during the 1st century BC – 1st century AD, described that Thracian women became frustrated and angered by Orpheus rejecting them, so much so that they murdered him by tearing him to pieces.

Orpheus was the son of Oeagrus and Calliope. A musician who also sung and played beautifully on a lyre, it was said that Orpheus had the phenomenal ability to be able to charm all living things. Regulary, a number of Thracian and Macedonian men would come to Leibethra where they gathered in a large building, to be entertained by Orpheus. Women, in those times, were not allowed the same rites. In anger, they gathered one day in front of the building, taking the men’s weapons, and waited for Orpheus to leave. They murdered any men in their path, then tore Orpheus limb by limb, and threw his severed body parts into the sea. According to ancient Greek mythology, when Orpheus’ head emerged from the sea, it was still lively, singing, and no signs of damage or death were visible.

Rhyta made out of clay or horns were among the most popular types of vessels of the ancient Thracian era. Therefore the fact that this rhyton is made of silver, tells us that it is particularly special. Add to this the unique shape of the goat protome on the bottom of the piece, makes this one of the most unusual objects within Vasil Bojkov’s collection. Even the stylishly curved horn is lavishly decorated – meticulous details adorn the vessel from top to bottom. Highly revealing in mythological representation and stories, the rhyton contributes to and expands our knowledge in relation to Thracian culture and arts. That it has been preserved so well over thousands of years is quite extraordinary, and it is no surprise that it was one of the most popular artefacts featured at the exhibition “The Golden Fleece – The Quest of the Argonauts”, held in Sofia, Bulgaria.