The Vasil Bojkov Collection is a spectacular assortment of over 4000 artefacts and archaeological findings that have been collected and preserved by the Thrace Foundation across the years. The ancient pieces vary in shape, size, materials, decoration, style, and the period they were made in. The high level of craftsmanship truly demonstrates the skills of people back then, their understanding of culture, politics, myths, legends, aesthetics, and everyday use. From stone sculptures, household objects, unique vessels and amphorae, to adornments, belt appliques, and even weapons – there is a lot to explore and admire. 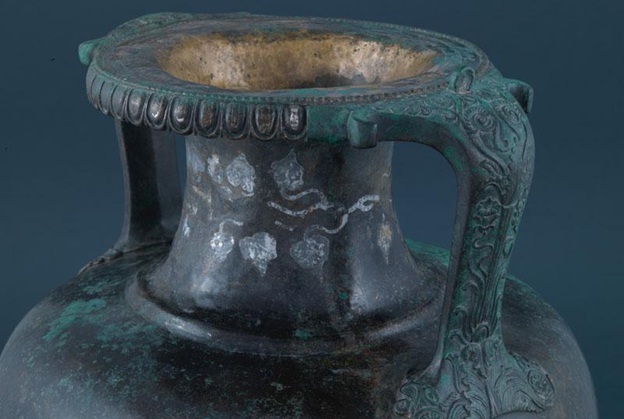 It goes without saying that Bojkov’s private collection proudly reveals a lot about ancient times. It also raises awareness of a number of cultural tendencies and artistic traditions that derive from many different places and regions. Rich in decoration and beauty, some of the archeological items keep the interest of historians and culture lovers alive. An example of such a fascinating piece is a bronze amphora adorned with a silver ivy wreath on the neck.

Amphorae were common among Greek toreutics, with over 30 entirely preserved examples known today. The shape of these creations is deeply intriguing and widely recognized. There are two distinct principal types of amphora. Firstly, there is the neck amphora where the neck and body meet at a sharp angle. Then, there is the one-piece amphora. In this case, the neck and body form a continuous curve. The former were usually used in the early years of ancient Greece. However, later on, they were slowly replaced by the one-piece amphora – approximately from the 7th century BC on. Many people wonder about the shape though. The reason behind establishing this well-known shape of the amphora was because it offered the greatest advantages when packing and shipping, since the peoples of that era transported many goods.

Now let’s take a closer look at the bronze amphora that is part of Vasil Bojkov’s priceless collection. It has what is referred to as a “rim arrangement” – three concentric chiseled circles and a hanging kymation topped by a row of beads on the periphery. There is a chiseled and gilded ivy wreath that is partially faded but still visible around the neck. It was once picked out in silver leaf. Another easy to notice detail is the floral composition on the handles. This is the most attractive feature of the amphora. The ornamental floral compositions are related to the Late Classical and Early Hellenistic traditions which were established thanks to a complex and prolonged process of inter-artistic exchange, modifications of previous works, adaptations of old models, and borrowings. It is not something that was crafted in a single workshop. This particular floral decoration formed as a mixture of experiences and processes in Athens, Corinth, Apulia, Macedonia, and Propontis.

To sum up, it is true that metal vases are far rarer than their ceramic equivalents because fewer were made and also because the metal deteriorated or was melted down. Nevertheless, there are some which have astonishingly been preserved until the present day, giving us a glimpse of ancient masterful embellishments, techniques, and works.