Metal Vases and Utensils in the Vasil Bojkov Collection, Vol. I – The Book Worth Collecting

Metal Vases and Utensils in the Vasil Bojkov Collection, Vol. I – The Book Worth CollectingIliyana IvanovaDecember 28, 2018December 18, 2018 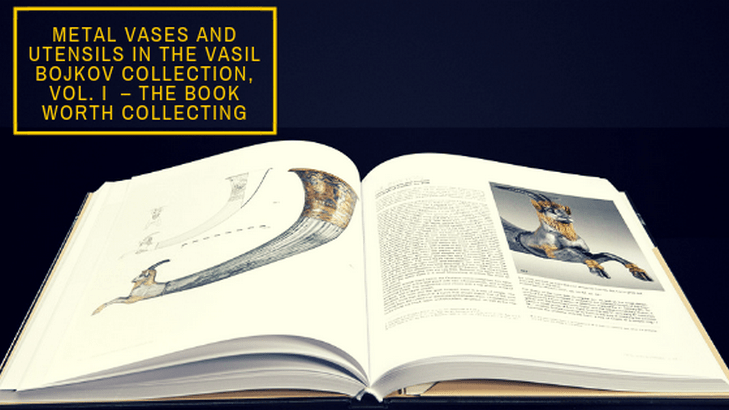 “A book is much more than a delivery vehicle for its contents.”
― Allison Hoover Bartlett

True, isn’t it? Every book has a story to tell but somehow when it comes to books on antiques and collectibles, most people perceive them as communicators of raw information that is difficult to fully comprehend. Yet sometimes there are very rare jewels that are worth having and exploring. One such example is “Metal Vases and Utensils in the Vasil Bojkov Collection, vol. I” by Athanasios Sideris.

This book represents the first of two volumes that discuss the exquisite collection of antiques owned by Vasil Bojkov. The first volume looks at plenty of pieces made of gold, silver, bronze, and metal, ranging from the 8th to the 1st centuries BC. “Metal Vases and Utensils in the Vasil Bojkov Collection, vol. I” it contains technical details, well-conducted analysis, lavish illustrations, and even various myths and stories surrounding particular artifacts. The author doesn’t keep spicy details in secret. Previously unknown facts and findings gain momentum on the pages, taking the reader to different places, locations, and moments from the past and present.

In order not just to please the mind but the eye as well, there are 110 drawings in the book, 388 color pictures and 111 black-and-white pictures. Containing rich bibliography, three indexes (revealing personal names, place names, and a general index), and three folding geographical maps in a pocket, this assembly of culture and artifacts on paper becomes great collectible for culture, art, and history lovers. Athanasios Sideris explores 146 valuables with over half of them being published and exhibited for the very first time.

Masterfully decorated pieces from the every day of ancient people, ritual objects, and drinking vessels speak for once-existing beliefs, culture, habits, way of living. Every single page turns into a chest of treasures. There are weights, shapes, and inscriptions of different artifacts discussed in an easy-to-understand way. The books also follow the evolution of different shapes, usage, and material of the artifacts. Some of these details are said to have been overlooked in older publications but now they are brought to the readers’ attention with the idea to allow them to better grasp the functionality and the overall representation of a given piece.

The book is smoothly articulated in five chapters. The first one is titled “Anatolian, Phoenician, Achaemenid” and spans from the 8th to the mid of the 4th century BC. The creations and vessels discussed in this chapter derive from the places contained in the title itself and many of them represent the Lydian toreutic school. In chapter two the reader encounters pieces from the Archaic period, dating from the second quarter of the 6th to the first quarter of the 5th centuries BC. The title is “Greek, Archaic.” Moving on to the third chapter, “Greek and Etruscan, 5th century BC”, Sideris focuses on creations that derive from major centers such as Athens, Argons, Campania, and Etruria. The pieces in this chapter are made during the period between the end of the Persian Wars and the end of the Peloponnesian War. Exclusively Greek works issued from Corinth, Athens, South Italy and Macedonia are underlined in the next chapter. It is titled “Greek and Etruscan, 4th century BC.” Lastly, readers delve into “Greek and Thracian, Hellenistic” pieces. Here the chapter collects pieces from the 3rd to the early 1st centuries BC.

“Metal Vases and Utensils in the Vasil Bojkov Collection, vol. I” is something worth having. This piece of writing covers everything that may interest every collector, historian, art or culture lover. Beautifully decorated and well-written, the first volume turns into a journey back in time delivered on a paper.