How to Look and Feel Like a Billionaire – Style Tips From Bojkov, Zuckerberg & Klatten

How to Look and Feel Like a Billionaire – Style Tips From Bojkov, Zuckerberg & KlattenIliyana IvanovaAugust 30, 2018September 14, 2018 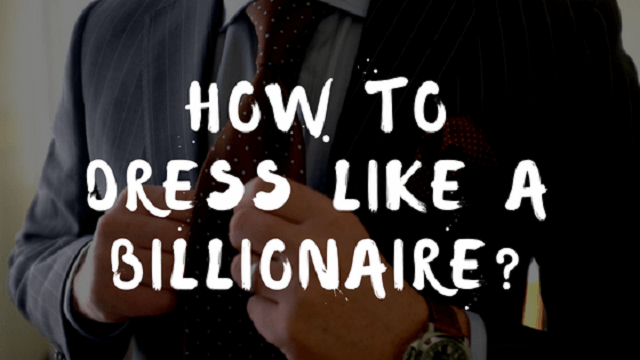 If you want to emulate the success of a billionaire, why not begin with learning how to look like one?

The way we dress is a lot more important than some might think. Within just seconds of setting eyes on somebody for the first time, subconsciously our brain is busy making judgements. Whether they are over-dressed or under-dressed, we predetermine their intentions and their trustworthiness without even knowing we are doing it. It is therefore crucial to get impressions right the first time.

Picture the scene – you are sat on airplane waiting to take off and catch a glimpse of the captain emerging out of the bathroom yawning and ruffling his unkempt hair. You notice his uniform is scruffy, his shirt is half untucked revealing the waistband of his boxer shorts and it looks as if he hasn’t shaved in days. It is likely that you would feel very uneasy trusting this man to fly you safely to your destination. While he may in fact be an extremely highly skilled pilot, your mind has already been made up.

Highly successful businessmen and women must know a thing or two about first impressions. So who better to draw inspiration from than billionaires Vasil Bojkov, Susanne Klatten and Mark Zuckerberg. Here’s a guide to how they like to dress:

The style Bojkov has adopted is more casual than formal, for instance his favourite footwear is a pair of comfy slip-on shoes. Seldom will you see Bojkov dressed in a suit and tie, with the exception of special events in which the occasion requires formal attire. It is far more likely that you will see him wearing a blazer on top of a reasonably plain t shirt, complete with some casual slacks. The self made billionaire tends towards darker colour combinations such as charcoal and grey, occasionally adding other subtle colours such as blue or cream into his outfit. A close friend of the owner of Chopard, Bojkov regularly attends her parties, while his favourite clothing designers include elegant brands such Valentino and Dior. They say a watch can complete an outfit; Bojkov’s staggering €25 million watch collection proves he is a firm believer in this.

Klatten’s style, dissimilar to Bojkov, is very formal. You will often see the German entrepreneur dressed to impress, wearing a suit jacket on top of shirts with a pinstripe or check patterned design. On occasions where she does choose to wear a dress, these are always well fitted and crisp to establish sophistication. Her preferred aesthetic is neutral and muted colours, together with a subtle piece of jewelry that compliments her outfit. It is obvious that she has carefully thought out her look. Being a woman in the male dominated world of business, Klatten’s dress sense conveys authority and elegance, which has certainly contributed to her success.

Zuckerberg embodies the laid back Silicon Valley aesthetic. The typical outfit you conjure up when you think of the Facebook founder is a simple t shirt, zipped hoodie and jeans combination. It is unusual to see him in any type of formal attire. The few times you might see him dressed in formal wear, he will don a fairly mundane suit, only if it is absolutely necessary such as when addressing heads of state or dealing with legal issues. Zuckerberg’s nonchalant appearance has not come without criticism though. In 2012, his appearance was questioned when he pitched to wealthy investors dressed simply in a hoodie and jeans. Yet this bold move paid off, as Zuckerberg’s look is not out of place for an executive at a Silicon Valley company. The facebook CEO proved to investors that he knew the culture of his industry well, demonstrating calm and confidence regarding his business.